The Forks: Visit Winnipeg's "Meeting Place" Destination for all Seasons 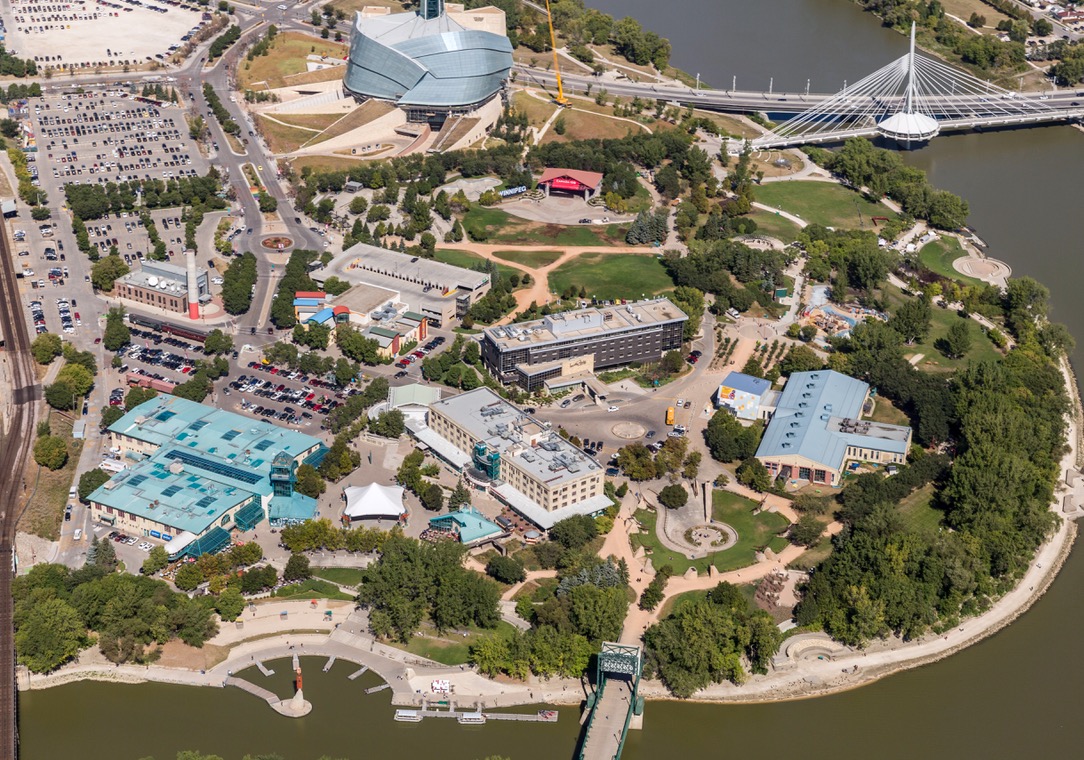 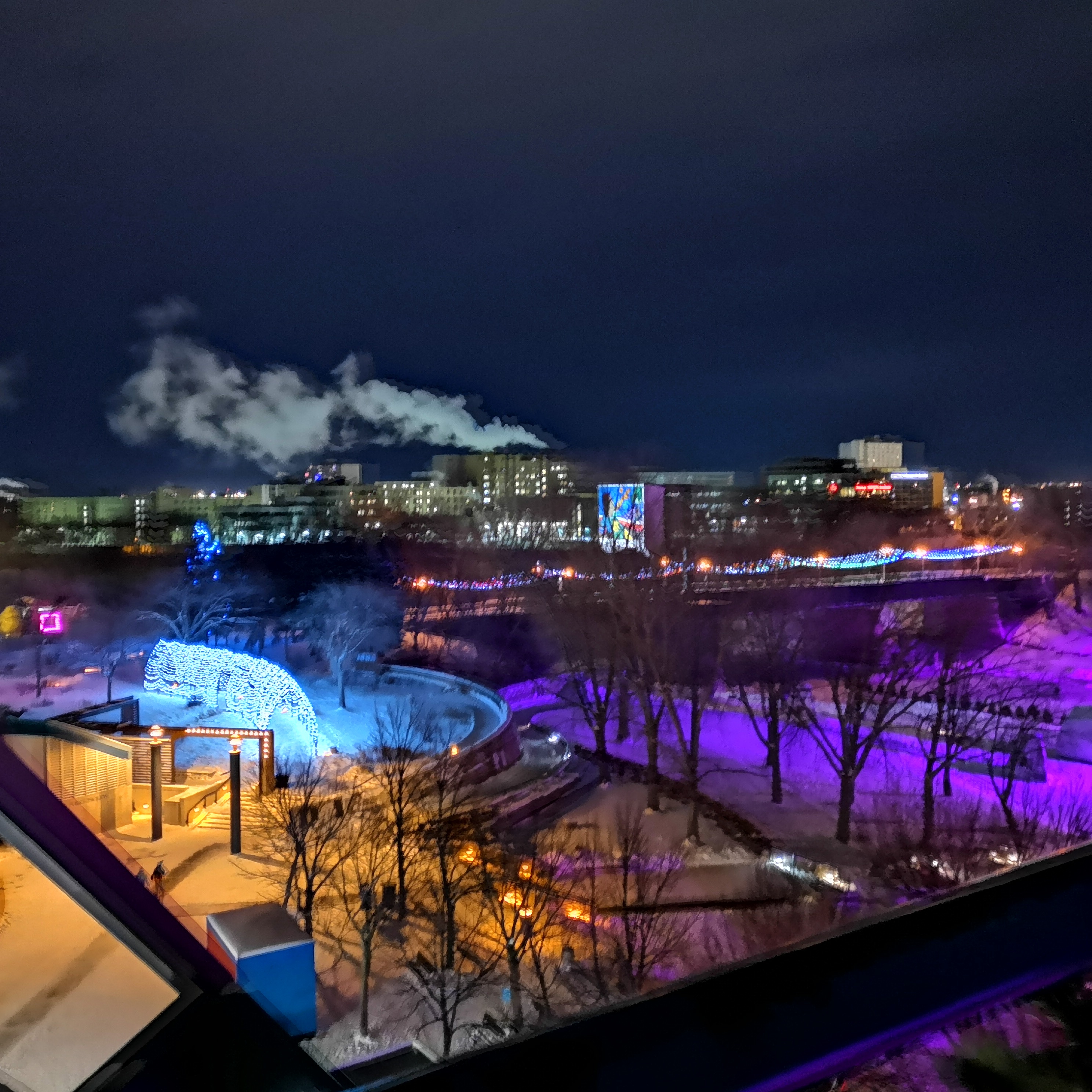 People have lived in the Forks for at least 6,000 years, according to archaeologists. An old fireplace was discovered during a series of archaeological investigations between 1989 and 1994, suggesting that bison hunters were there about 4,000 BCE. The city of Winnipeg and the Forks are on traditional territory. Because of the murky appearance of the water where the Red and Assiniboine rivers meet, Cree Ojibwe Assiniboine Dakota oral tradition claims that Winnipeg means "muddy waters." 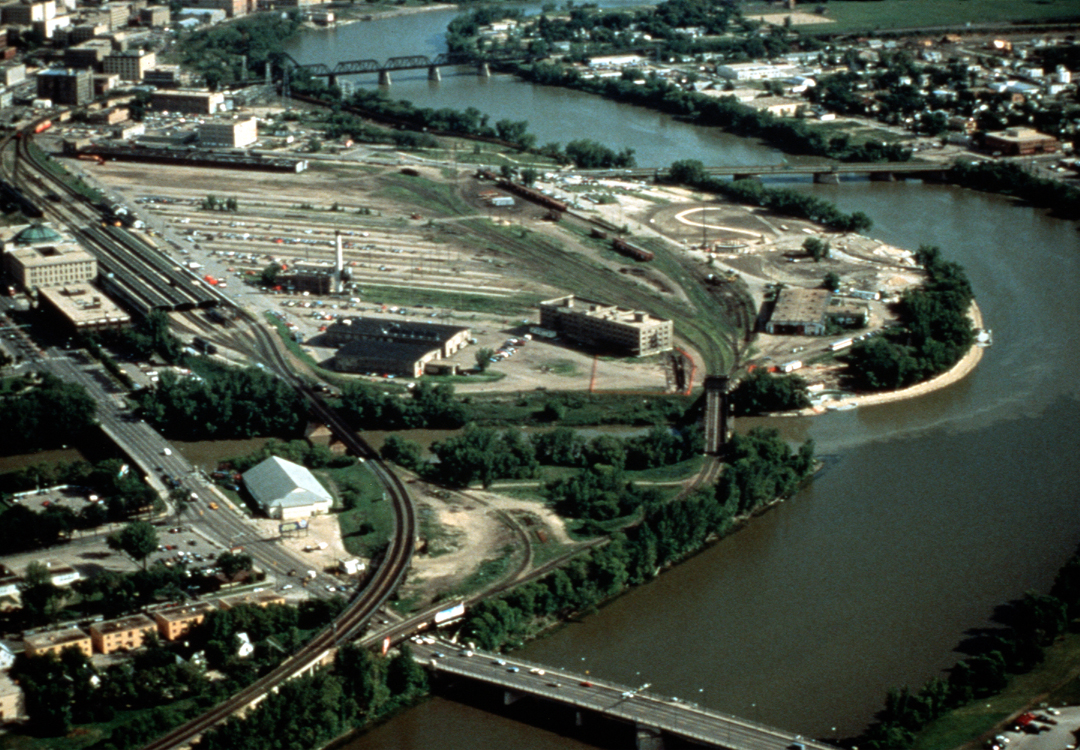 The Forks is also recognised as the Métis Nation's birthplace (see Métis National Council). The location has been a part of Indigenous heritage for centuries, according to elders. Many countries gathered there to conduct commerce, traditional medicine, politics, and even war. No one tribe held exclusive rights to the Forks as a meeting site, which witnessed a lot of commerce and celebration throughout the ages, as well as a lot of conflicts between Indigenous nations. The Forks have functioned as a military base for a number of countries. The river was dubbed Miskosipi "Crimson River" by Clarence Nepinak of the Pine Creek First Nation because "so many people killed in one of these conflicts, the river ran red." 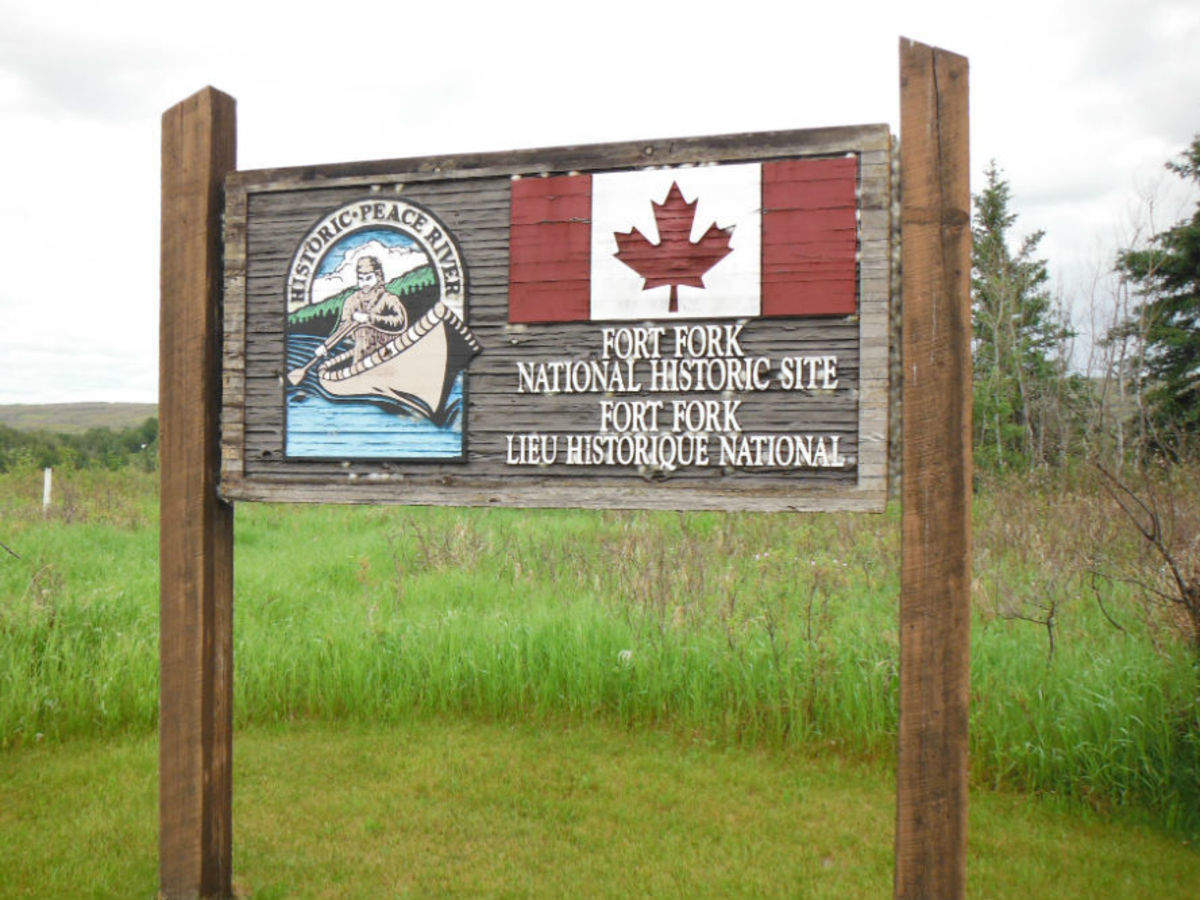 The Forks National Historic Site was established in 1974 by the federal government on public property on the north and south banks of the Assiniboine River, as well as the west bank of the Red River. Forts Rouge, Garry, and Gibraltar National Historic Site of Canada, which honours the numerous fur-trading posts that existed at the river confluence, are among the other historic sites at The Forks. While archaeologists have discovered evidence of previous forts, the only ones visible now are the ruins of Upper Fort Garry.

In the late 1980s, The Forks became a popular tourist attraction. The Forks North Portage Partnership, a community development organisation, has had a hand in creating this new identity. The partnership, which was formed by the merging of two companies that were established in the 1980s to rehabilitate the area, emphasises the Forks' position as a mixed-use gathering place. Railway-era structures have been saved and reused. 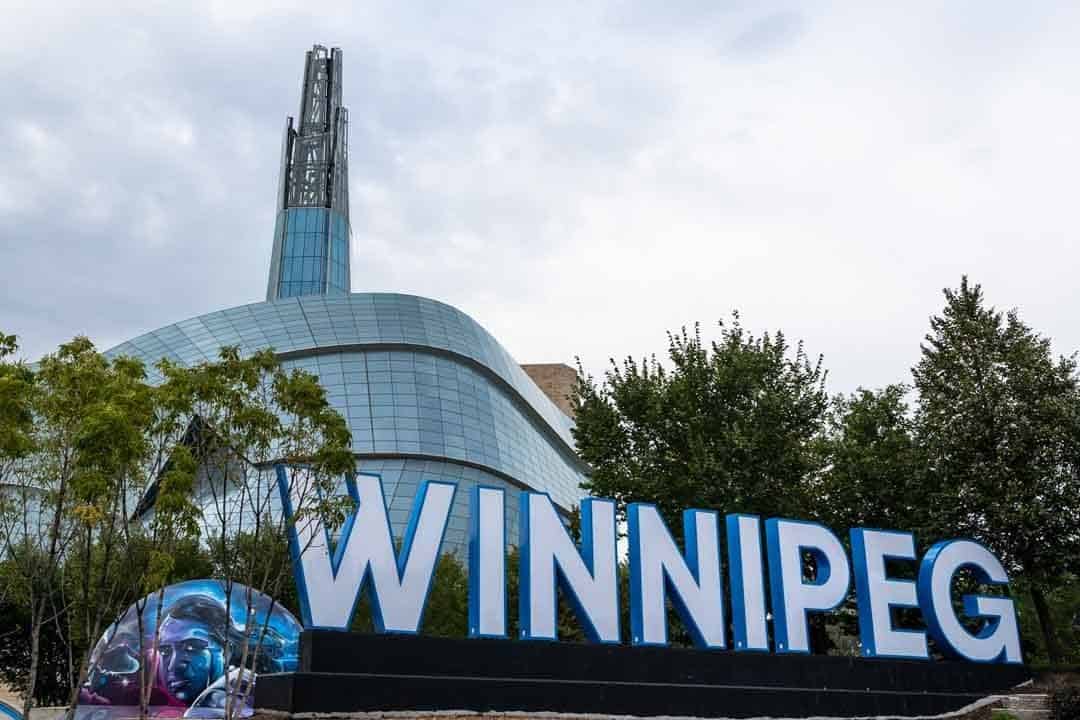 For example, the Forks Market is housed in the old horse stables of the Grand Trunk Pacific and Great Northern Railways. Formerly a railway warehouse, Johnston Terminal today contains stores, offices, and hospitality services. The Manitoba Children's Museum is housed in an 1889 railway maintenance shop. The old horse stables of the Grand Trunk Pacific Railway and the Great Northern Railway now house the Forks Market. Shops, offices, and hospitality services are currently housed in the old railway warehouse. The photo was shot on June 16, 2012. The museum, which is located in Winnipeg's Forks, is housed in a former railway maintenance shop that was constructed in 1889.

In accordance to the 1871 agreement between the Crown First Nations Treaties 1 and 2, the Forks is today often referred to as Treaty One Territory. Despite the growth that has occurred over the last two centuries, the region has stayed faithful to its heritage as a centre for significant conversation and communication. Indigenous peoples, Winnipeggers, Manitobans, Canadians, immigrants, and visitors from all over the globe all congregate at the Forks today. 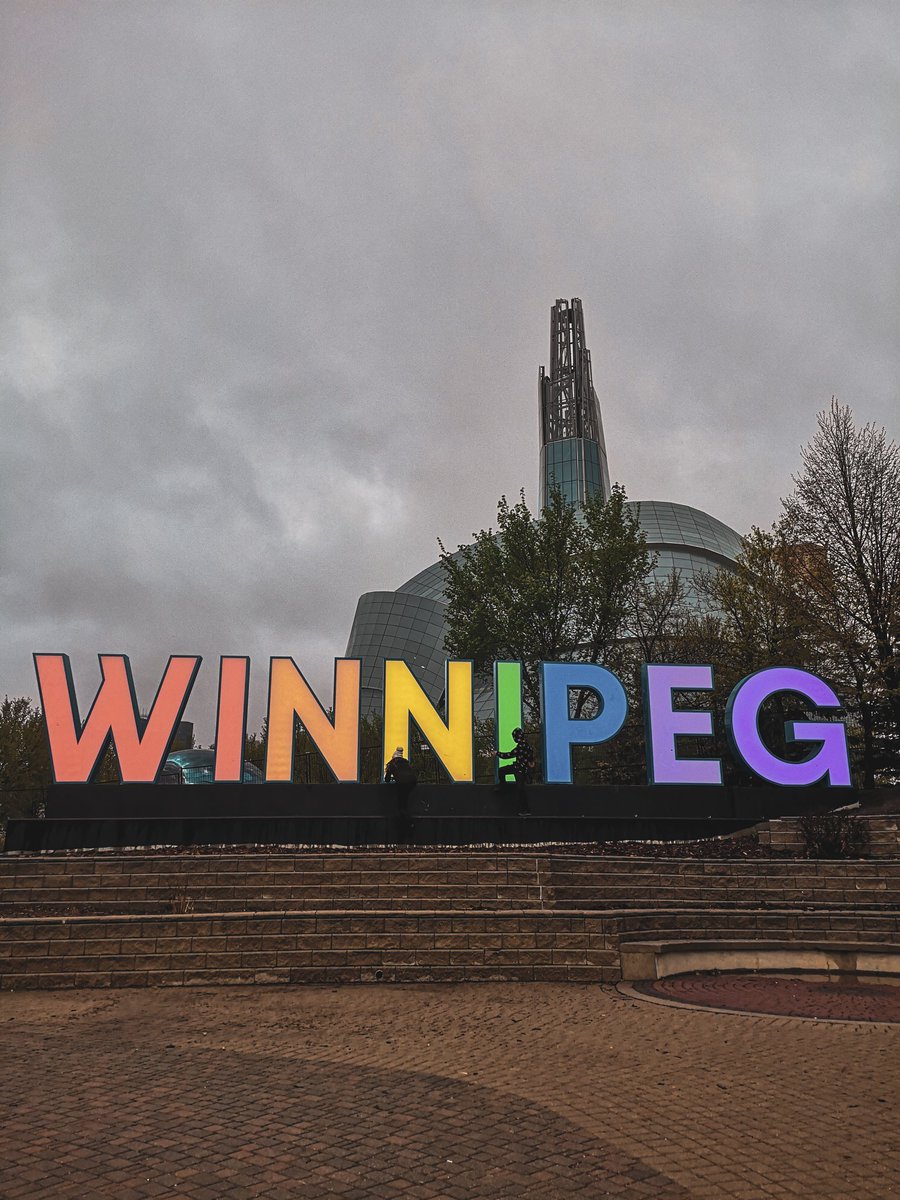 Throughout the summer, the Scotiabank Stage, an outdoor amphitheatre, hosts a number of events, including the annual Pride Winnipeg Festival and the Aboriginal Peoples Television Network's (APTN) annual Aboriginal Day Live. Oodena Celebration Circle, an outdoor amphitheatre in the heart of the Forks, hosts numerous religious events throughout the year. It's where the annual Manito Ahbee Festival starts out, and where summer powwows take place. In July, the Forks offers guided tours as well as tipi lessons for schools and the general public, which include traditional activities like bannock cooking and storytelling. Officials in charge of the Forks have pledged to stay in touch with knowledge keepers in order to promote the transmission of historical information to future generations from all walks of life. 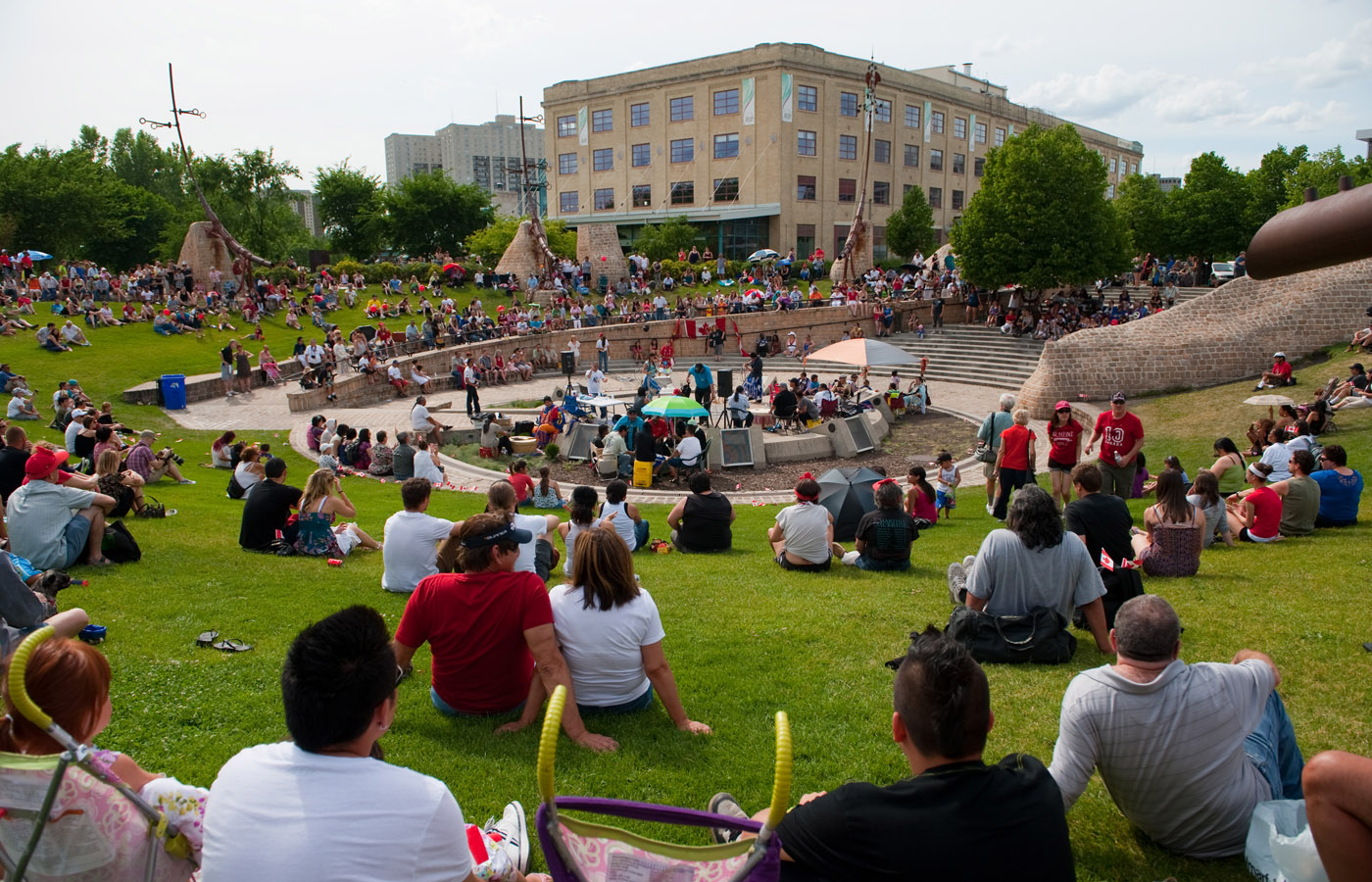 Various elements of the area's history are commemorated by monuments at the Forks. The Wall Through Time, which was built in 1990–91, uses plaques placed on a curving brick wall to tell the narrative of the Forks. Near the Assiniboine River, the building surrounds a significant archaeological site, a 3,000-year-old Indigenous encampment and trading centre. A bronze shell surrounds a piece of polished limestone in Marcel Gosselin's artwork The Path of Time (1991). The outlines of tools that humans have used to sculpt the history of the Prairies have been carved from the shell. The pictures of the tools are cast into the limestone as the sun travels over the artwork. 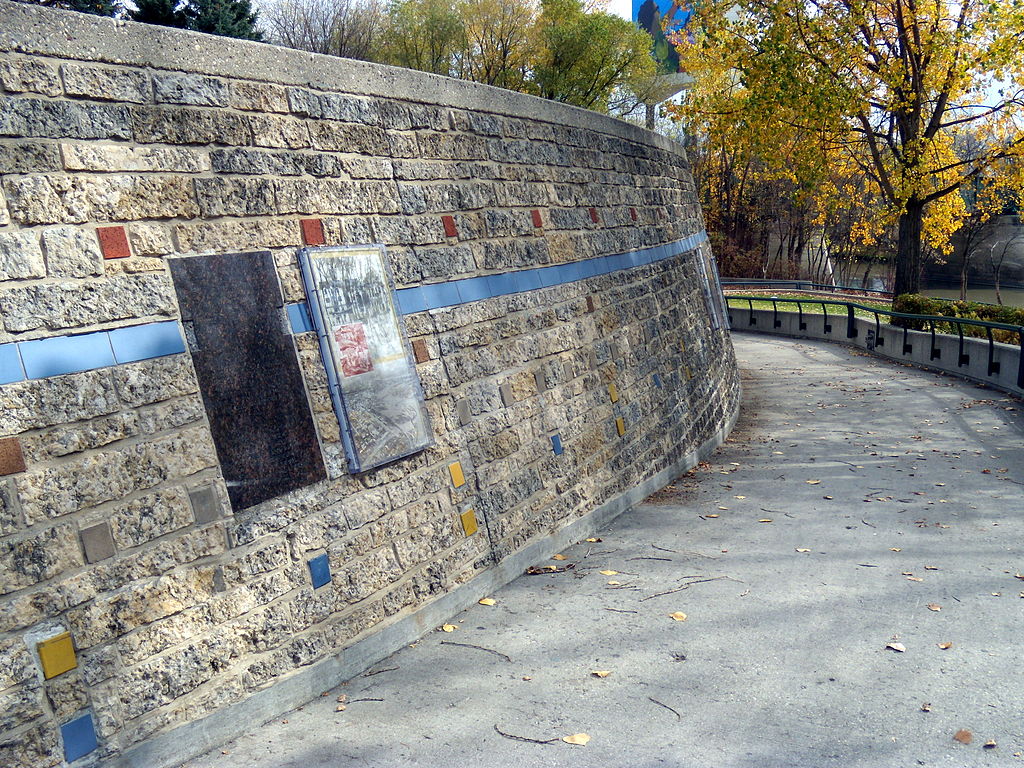 On August 12, 2014, a memorial honouring the lives of Indigenous women and girls who have gone missing or been murdered was erected at the Forks. Tina Fontaine, 15, was rescued from the Red River a few days later, about one kilometre north. The death of the adolescent from the Sagkeeng First Nation brought the problem of missing and murdered Indigenous women and girls to the attention of many Canadians, prompting fresh demands for a national investigation into the epidemic. Hundreds of people gathered at Oodena Circle on August 19, 2014, for a vigil for Fontaine. 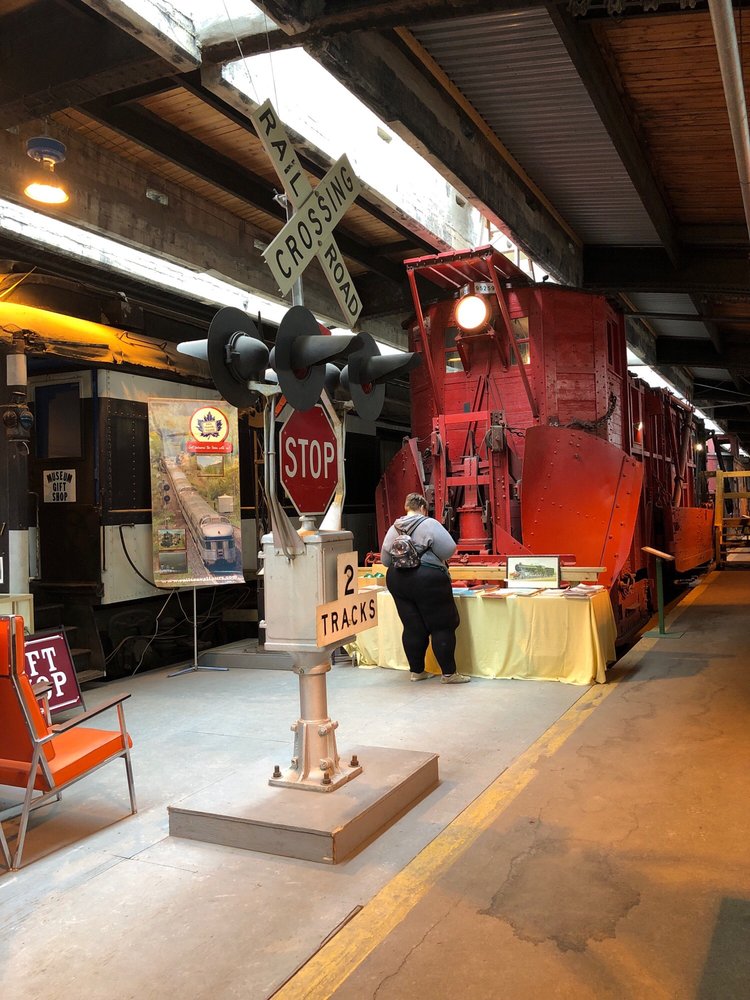 Three museums may be found in The Forks. The Winnipeg Railway Museum, which is housed at Union Station, has historic railway carriages, equipment, and displays connected to the city's railway heritage. The Manitoba Children's Museum has 12 permanent galleries and temporary travelling exhibits, all of which are intended to involve children in learning, creative, and development activities. In 2014, the Canadian Museum of Human Rights opened its doors. It was constructed, according to spokespeople, to serve as a symbol of good transformation and reconciliation in Canadian society. It was here where survivors of residential schools met and shared their stories as part of the Truth and Reconciliation Commission's first sessions in 2009. 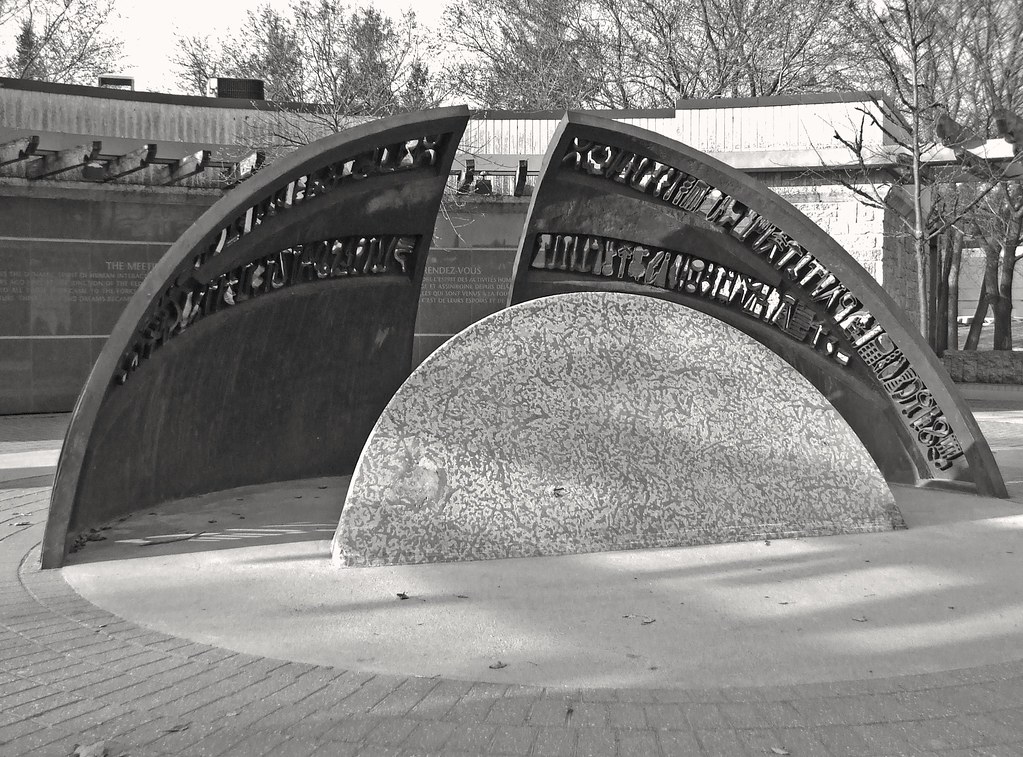 With plaques placed on a curving brick wall, The Wall Through Time tells the narrative of the Forks. The photo was shot on October 7, 2012. In the upper left corner, you can see the Wall Through Time monument. The Forks, Winnipeg, Manitoba, Canada, has a Plains Cree inscription on exhibit. "The masonry for the Wall Through Time was donated to the people of Manitoba by the International Union of Bricklayers and Allied Craftsmen Local 1 Manitoba to celebrate 100 years of service, by Manitoba masonry contractors, and by Manitoba masonry suppliers," according to the English translation. Marcel Gosselin made the artwork in 1991.

The Forks, at the junction of the Red and Assiniboine Rivers, has been a meeting site for 6,000 years. The Forks, a former railyard, is now Winnipeg's most popular destination, attracting more than four million people each year. The Forks Market, a varied shopping destination with a range of specialised stores, restaurants, cuisine, and entertainment choices, is one of the major attractions at the site. 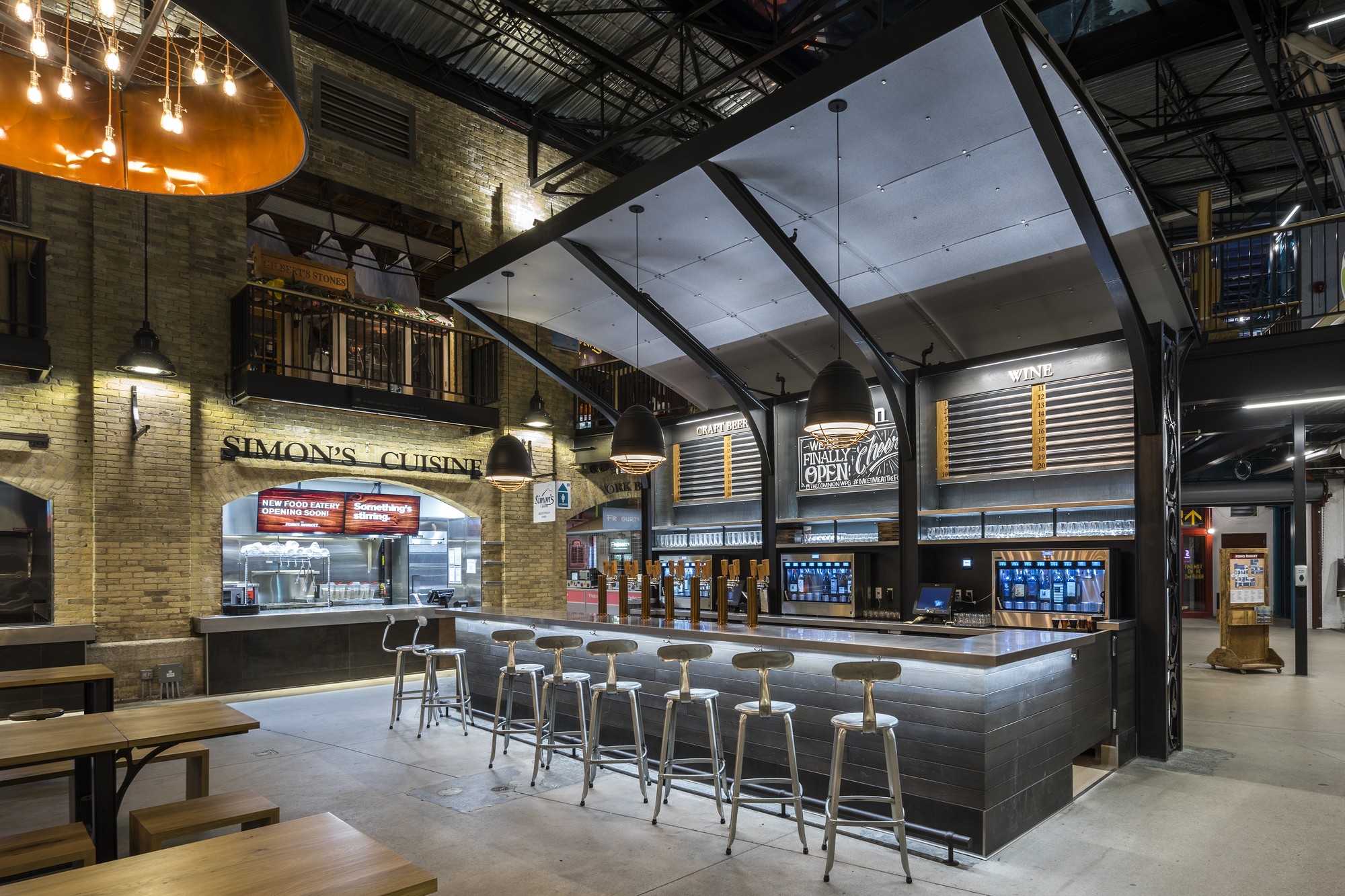 The Forks Market's new look honours the city's rich past while also looking forward to its bright future. Referencing the facility's industrial origins as two separate railway stables, the interior redesign of the market's atrium incorporates a unique blend of raw steel, blacksmith work, and reclaimed natural wood detailing. To delineate the eating area and create highlight lighting in the room, large metal drum pendants are hung above the tables. Food kiosks have been reimagined with the goal of attracting high-quality vendors that provide a diverse range of cuisines. A new beverage kiosk offers a broad selection of craft beer and wine that may be tried or matched with the cuisine. To reinforce The Forks' reputation as a meeting place, the space includes a series of custom designed small oak tables that can be transformed into a single 80-person harvest table for large gatherings and events. 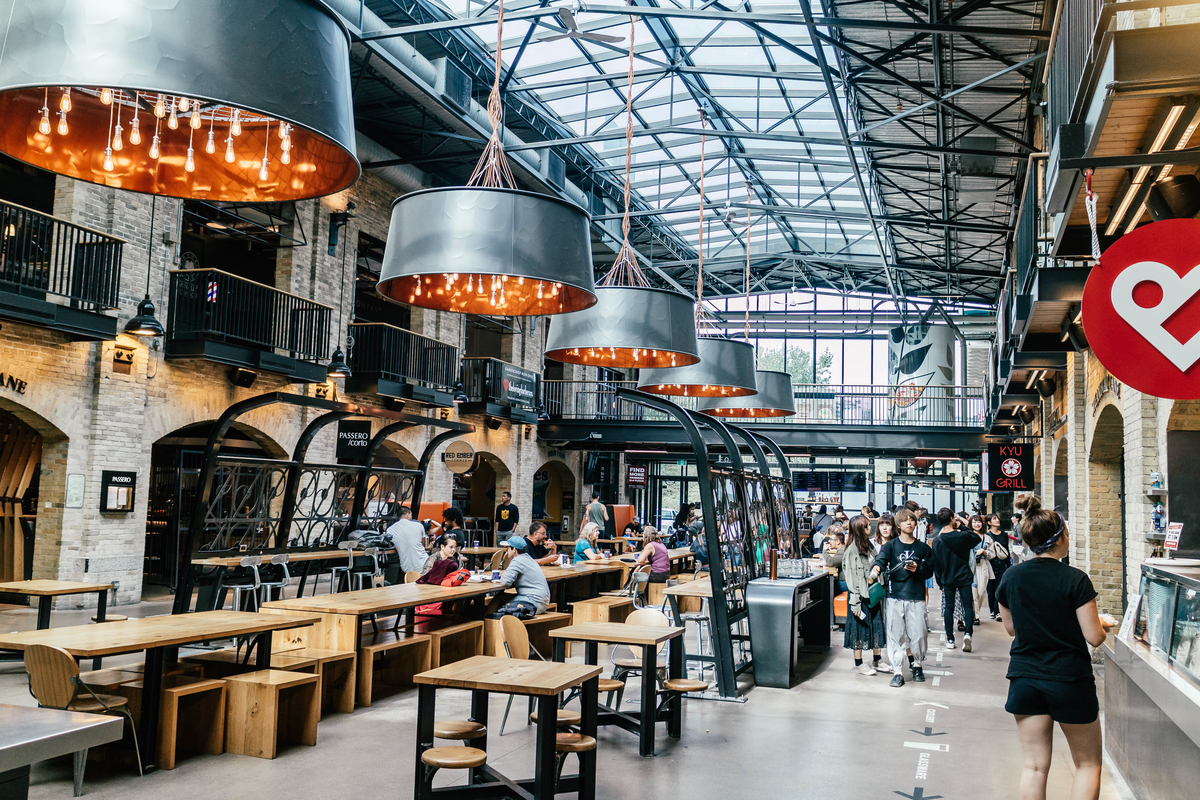 The renovated Forks Market ushers in a new era for Winnipeg's most beloved gathering spot. In 2017, the Forks Market won the top award at the Commerce Design Winnipeg Awards for its outstanding interior design.The Manitoba Children's Museum, located adjacent to the Oodena Celebration Circle, is a non-profit, charity children's museum with twelve permanent galleries. The museum relocated to its present site in the Forks in 1994 after opening at a previous location in 1986. The museum is currently located in the former Kinsmen Building, which was constructed in 1889 and is Manitoba's oldest surviving railway maintenance facility. In 2011, the museum had a $10 million makeover, which included the construction of the Buhler Welcome Centre. 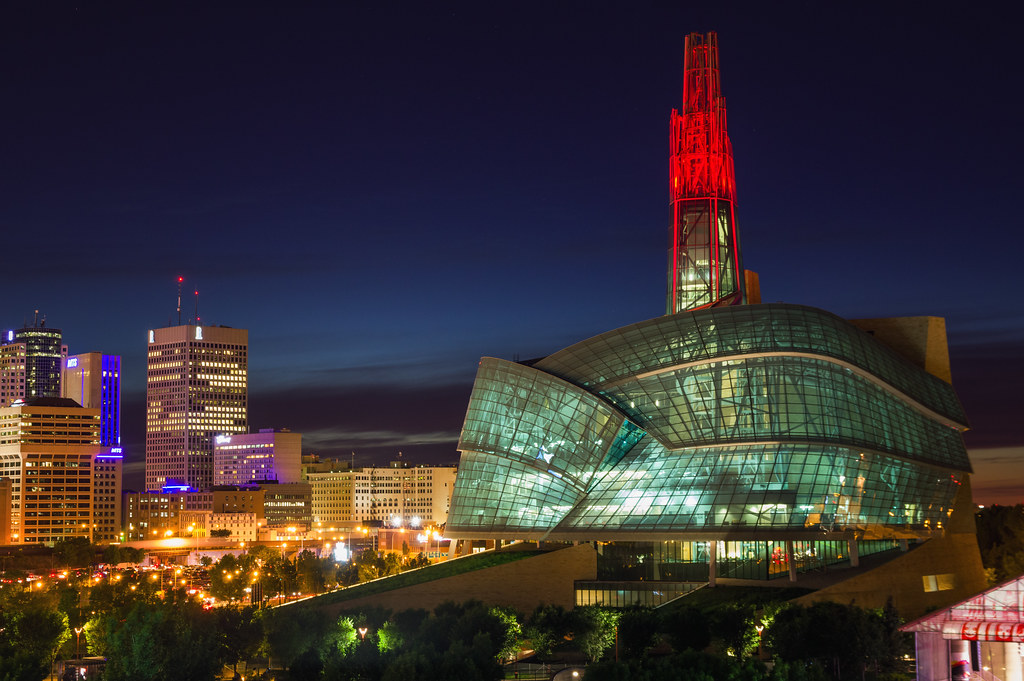 The Manitoba Theatre for Young People (MTYP) is a theatre for children and young people that is situated in The Forks, Winnipeg, inside the Canwest Performing Arts Centre. The theatre will be able to utilise 28,000 square feet (2,600 m2) of space to further its objectives of creating enjoyable professional theatre, offering theatrical training, and representing the experience of Canadian children. 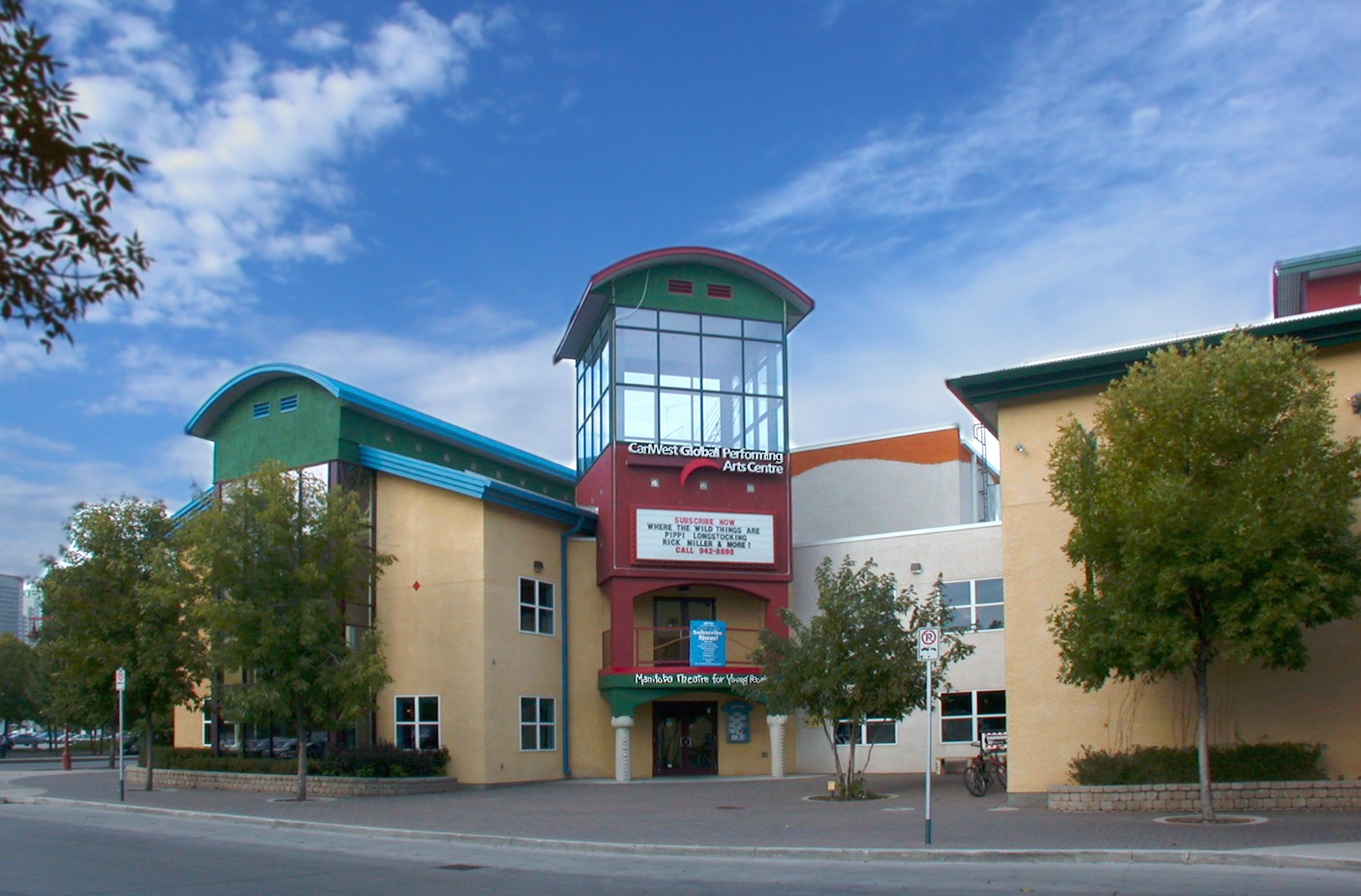 MTYP's Theatre School provides courses for children as young as three years old throughout the Fall, Winter, and Spring semesters, as well as Spring break and Summer camps. MTYP provides free acting, performance, and film training to Aboriginal children in Winnipeg between the ages of 12 and 18.

Inn at The Forks

The Inn at the Forks is a five-story hotel in Forks. The Inn at the Forks project was the first Canadian application of the "Redi-Maid" system that links ensuite occupancy sensors, lighting and mechanical system controls to staff PDAs with the goal of maximizing energy efficiency. The hotel was built in May 2004 at a total cost of $16 million. 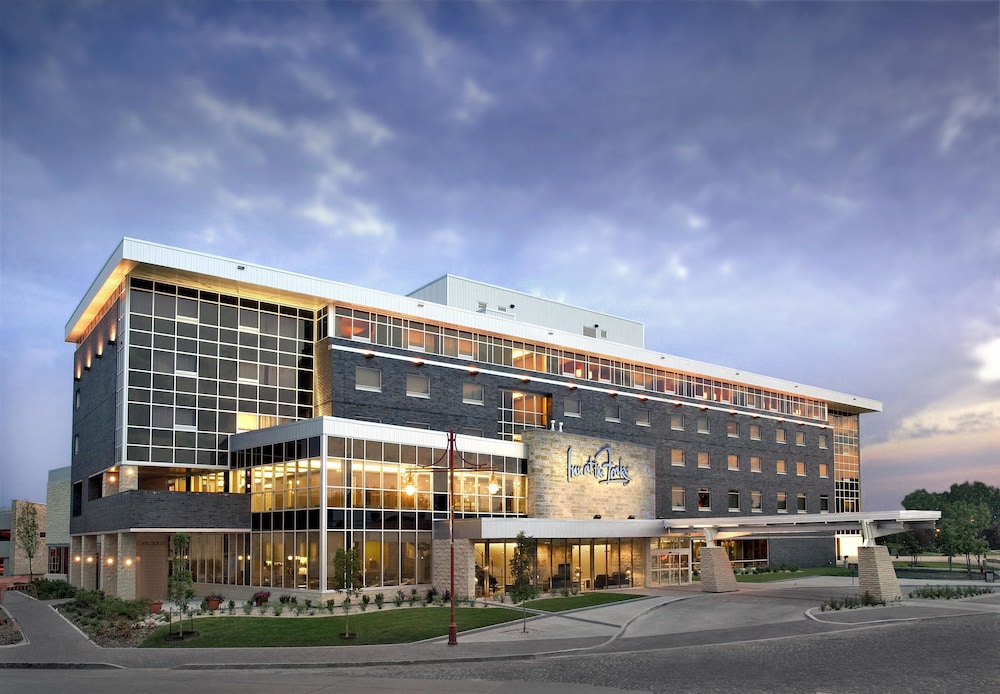 The Current Restaurant & Lounge and Riverstone Spa are among the hotel's 117 guest rooms and suites, as well as conference and event space for up to 200 people, exercise facilities, and The Current Restaurant & Lounge. Natural slate flooring in the main lobby, glass vanities in suite bathrooms, heated floors, and a water wall in the spa are all highlights of the hotel.